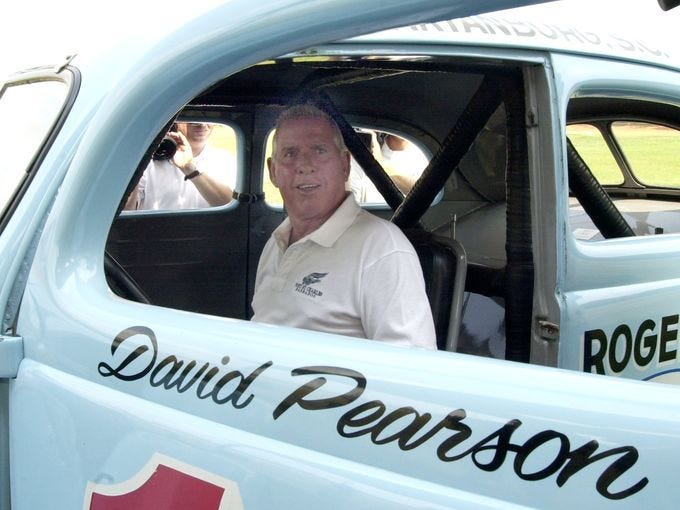 David Pearson, described by Richard Petty as the “greatest race car driver that I raced against,” died Monday. He was 83.

Leonard Wood of the Wood Brothers introduced Pearson at the 2011 NASCAR Hall of Fame ceremony by saying: “It is my great pleasure to introduce to you the greatest driver in the history of NASCAR, Mr. David Pearson.

Throughout his Hall of Fame racing career, which spanned nearly 30 years, Pearson amassed an incredible 105 victories in NASCAR’s top division. That mark stands as the second-most of any driver in history, behind only Richard Petty’s 200 career Cup wins. Pearson also won three championships — in 1966, 1968, and 1969 — compared with rival Petty’s seven.

“I grew up with Bobby and Donnie (Allison) and all those guys but when it came to Steve McQueen cool that was Pearson, he was the coolest of them,” NBC Sports analyst Kyle Petty said of Pearson. “The way he walked, the way he carried himself. Forget what he did on the race track, he was just cool. That’s the word beside him in the dictionary.”

“When you talk about the number of races people win, he didn’t run nearly as many races as most of the others, his winning percentage was unbelievable,” NBC Sports analyst Dale Jarrett said. “I know he gets credit, but you talk to people who raced in his era and watched, they considered him if not the best one of the top two or three that ever did this.”

During his 2011 Hall of Fame Induction Ceremony speech, Pearson thanked Richard Petty. “I want to thank Richard Petty, too. He’s probably the one that made me win as many as I did. I’d run hard because he’d make me run hard. … I’ve had more fun running with him than anybody I’ve ever run with.”

Richard Petty and Pearson engaged in one of the sport’s greatest finishes in the 1976 Daytona 500 when they crashed coming to the checkered flag. Pearson prevailed for his only Daytona 500 triumph.

“I have always been asked who my toughest competitor in my career was. The answer has always been David Pearson. David and I raced together throughout our careers and battled each other for wins – most of the time finishing first or second to each other.

“It wasn’t a rivalry, but more mutual respect. David is a Hall of Fame driver who made me better. He pushed me just as much as I pushed him on the track. We both became better for it.

Darlington Raceway oh issued a statement Monday night. The track was the site of many special moments for Pearson. He won there a track-record 10 times.

“Darlington Raceway expresses its deepest condolences and sympathies to the family and friends of David Pearson. His record 10 wins at Darlington Raceway put him in a league of his own. His fierce competitiveness and passion for the sport endeared him to the NASCAR faithful. His Hall of Fame career will go down as one of the most prolific in the history of the sport. A native South Carolinian, he was a wonderful ambassador for our sport and for the Palmetto State. He will be missed and will always be remembered.”

“David Pearson’s 105 NASCAR premier series victories and his classic rivalry in the 1960s and ’70s with Richard Petty helped set the stage for NASCAR’s transformation into a mainstream sport with national appeal. When he retired, he had three championships – and millions of fans. Petty called him the greatest driver he ever raced against. We were lucky to be able to call him one of our champions.

“The man they called the ‘Silver Fox’ was the gold standard for NASCAR excellence.

“On behalf of the France Family and everyone at NASCAR, I want to offer sincere condolences to the family and friends of David Pearson, a true giant of our sport.”